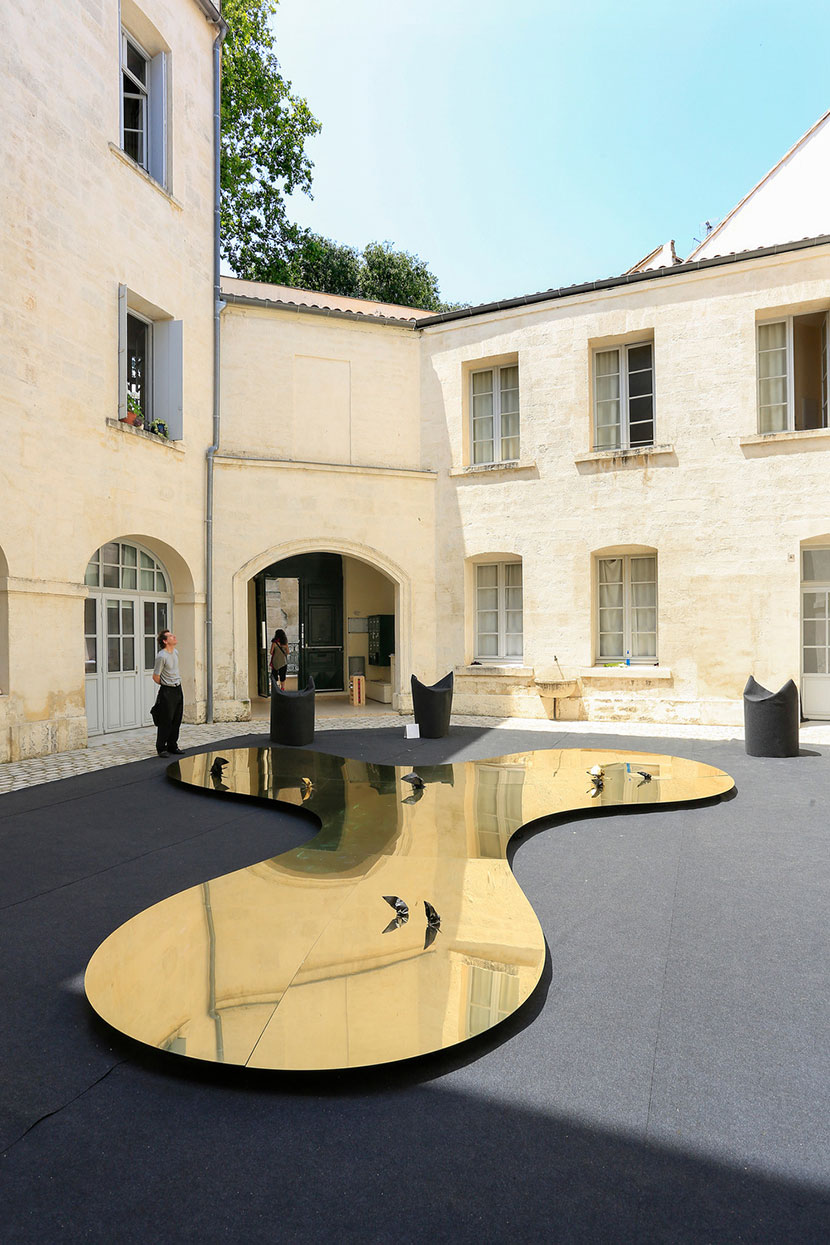 The Festival des Architectures Vives aims at raising public awareness on the wide range of architecture. It seeks not only to highlight the work of a young generation of architects, landscape architects and urban planners but also to discover unexpected urban areas. Through two urban tours, one in the historical heart of Montpellier’s town and a second in La Grande Motte, the public can discover works of contemporary architecture in unique sites, sometimes unknown from people. In Montpellier, courtyards of private hostels, usually closed to the public, open their doors during the festival. In La Grande Motte, the festival offers an urban course in the heart of Jean Balladur’s architecture, which caracterises this seaside town, recently approved “Heritage of the XXth Century”. In 2015, the Festival des Architectures Vives invested 20 sites in total with 19 installations + 1 pavilion. 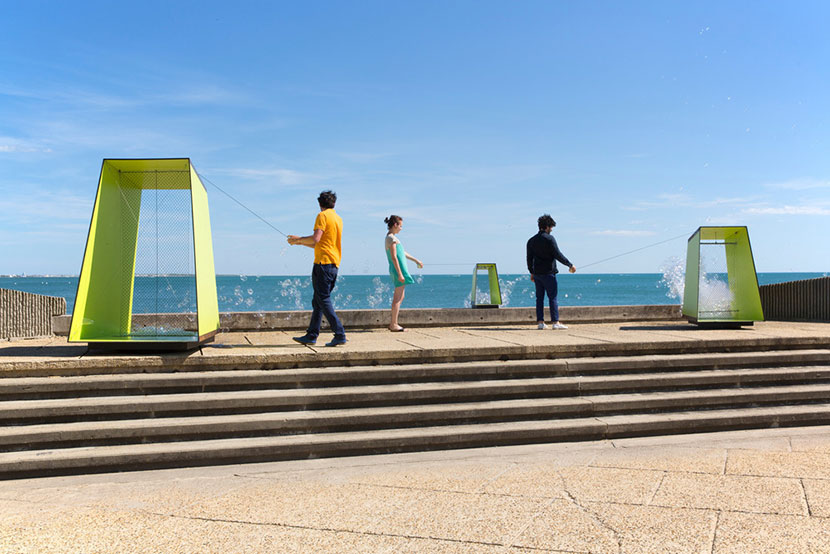 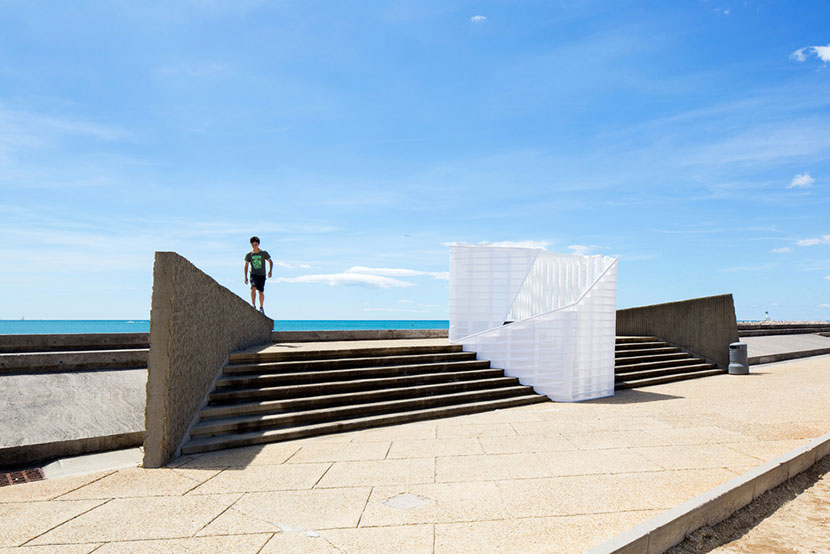 Many works allow interaction with visitors. Leaving no physical trace, the festival seeks to make an impression, to initiate a global reflection on architecture and its development in existing urban context and finally, to create a dialogue between contemporary works and heritage. Mediators are present on each site. These mediators are students at the School of Architecture of Montpellier and they endeavour to strengthen appreciation of the works of the visitors. The event is free, this reflects the desire of opening architecture to the greatest number. The FAV is organized by Elodie Nourrigat and Jacques Brion, architects in Montpellier.

Since the 2011 edition, the FAV has implemented the realization of a Pavilion which welcomes public one week before the FAV, and during the hole edition of the festival. Easily identifiable, it is also the starting point of the tour. The Pavilion is a meeting place and a forum for all visitors. People are encouraged to come back to it point at the end of the tour and to vote for their favorite work. Visitors can get informations about the past editions and leaf with books about the past editions of the FAV. 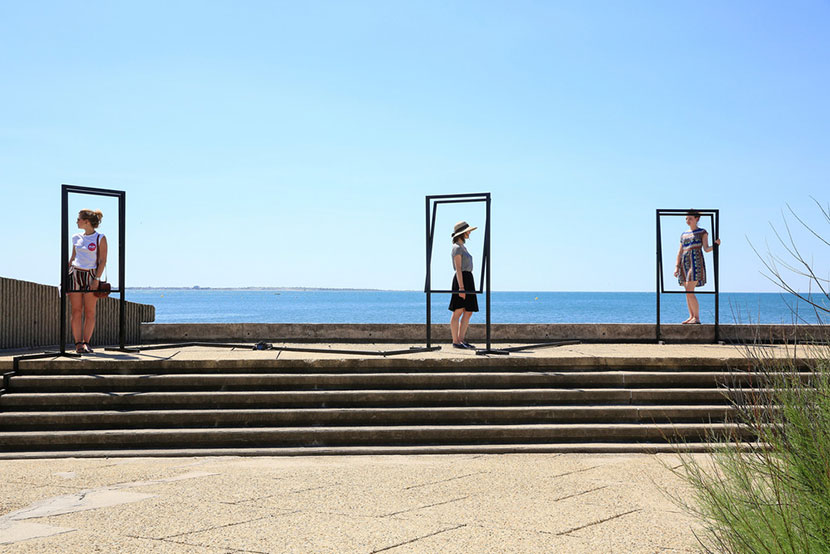 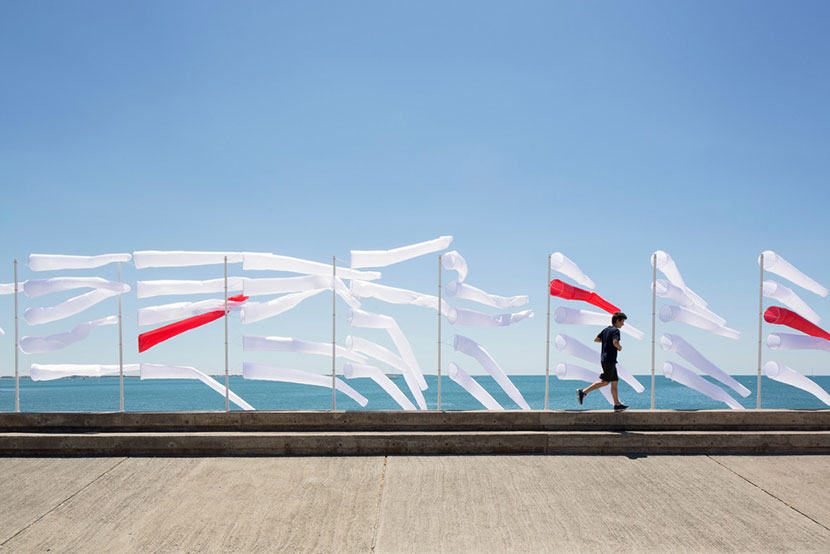 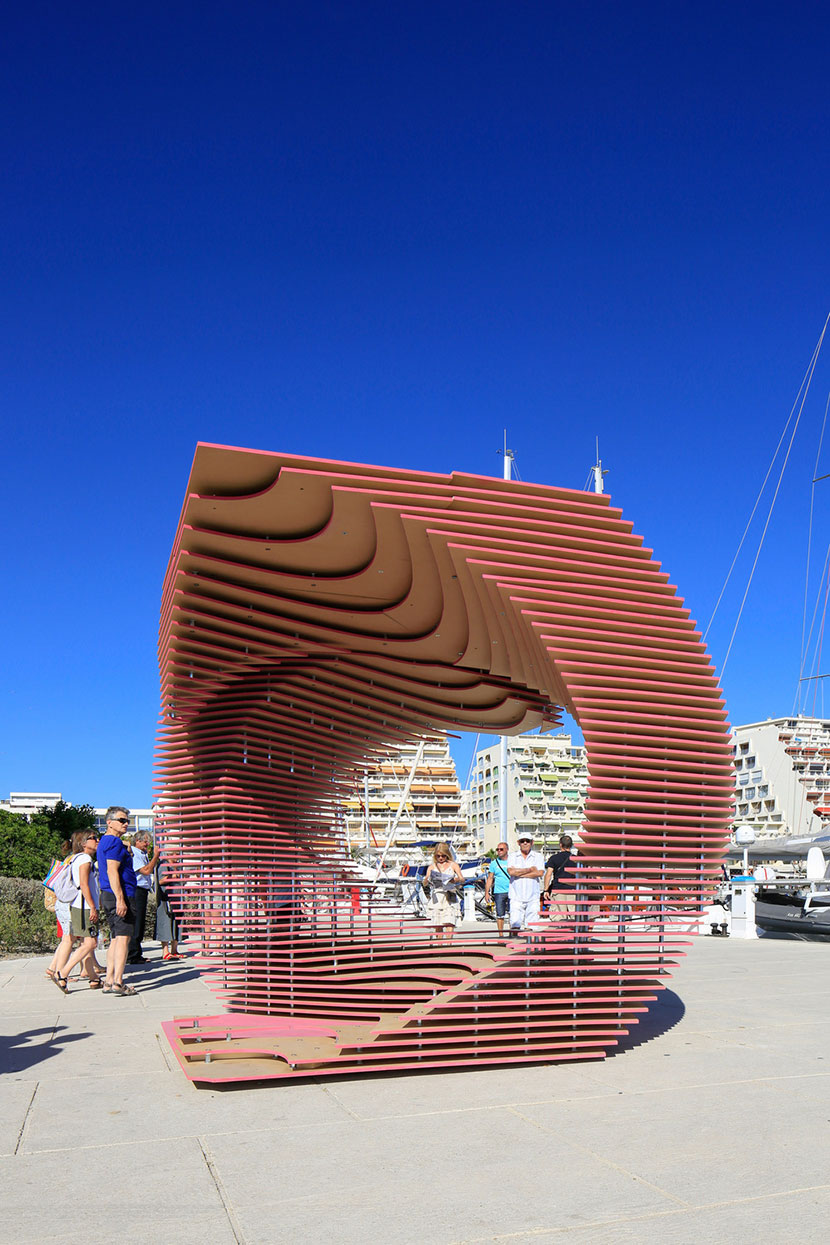 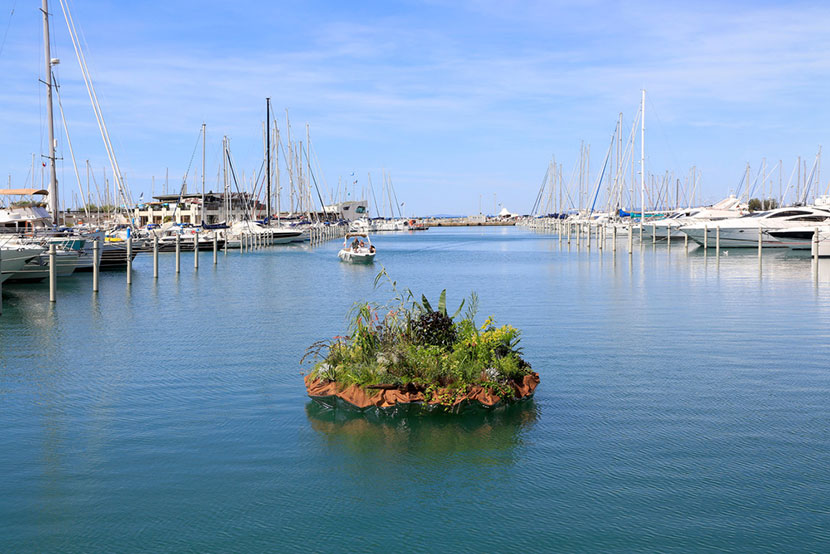 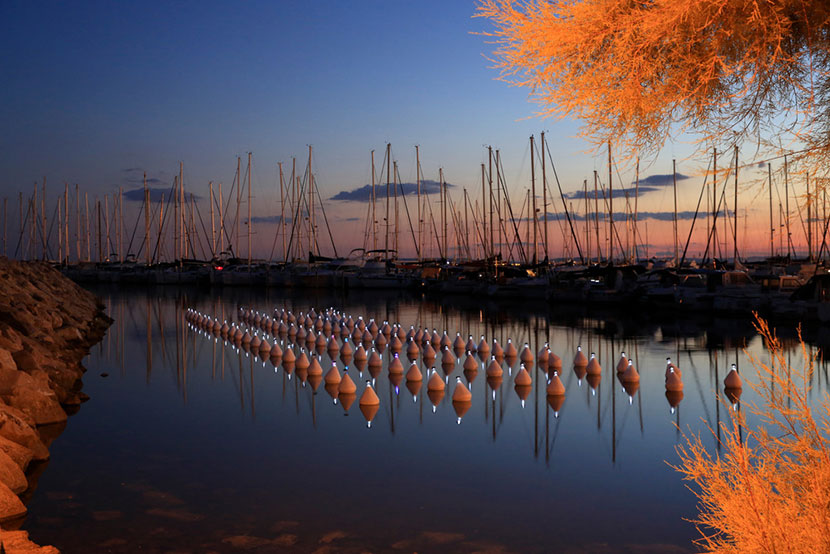 is entrusted to young architects exercising in the Languedoc-Roussillon region, where takes place the festival. In 2015, the Pavilion of FAV at Montpellier was realized by NAS Architecture, made up with Johan Laure, Hadrien Balalud de Saint Jean and Guillaume Giraud who got the Jury Price and the Public Price at La Grande Motte in 2014. In june 2015, took place the 10th edition of the Festival des Architectures Vives on unique urban territories. At Montpellier from the 10th to the 14th of June 2014, on the theme “The Tenth”, visitors have had the pleasure to be immersed at the heart of a sensitive experience unexpected shifted, open, destabilizing, welcoming …

The Public Prize rewarded “Goldfish”, the work of Julien Plessis and Claire Dusonchet, the Jury price was given to Margaux Rodot, Mickaël Martin et Benoît Tastet for “Un dixième printemps” and a Special Mention was granted to the Syracuse University, made up by Maya Alam,  Waralee Kaewkoon, Emily Greer, et Thomas Byung H. Kim. 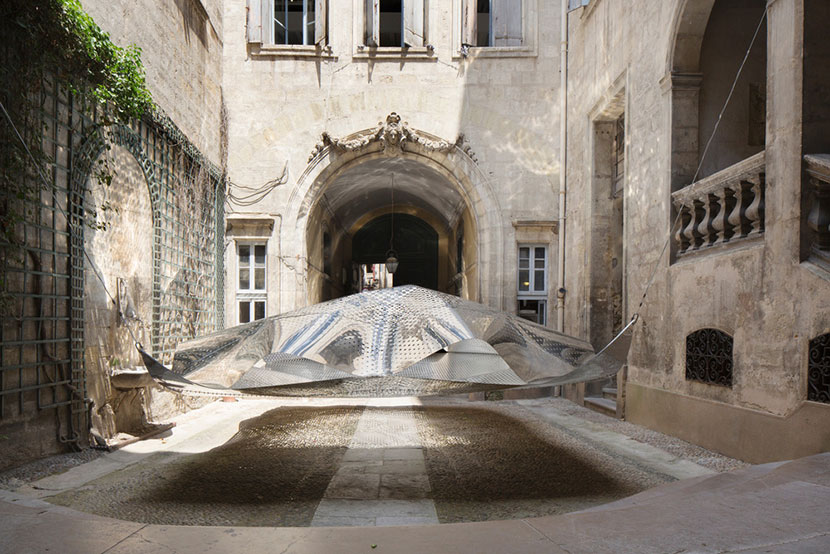 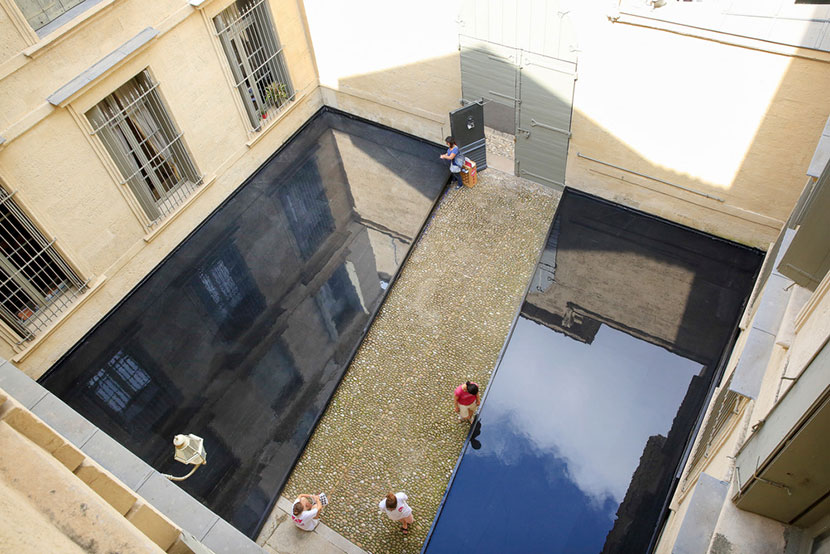 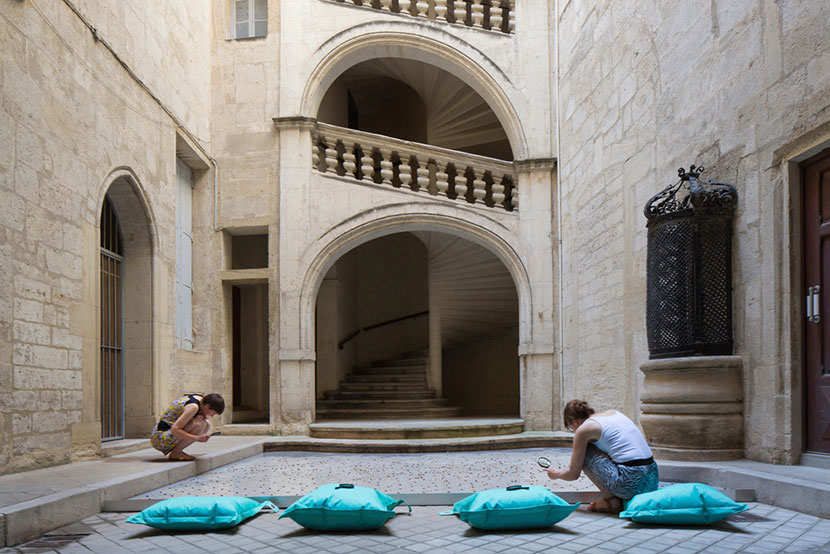 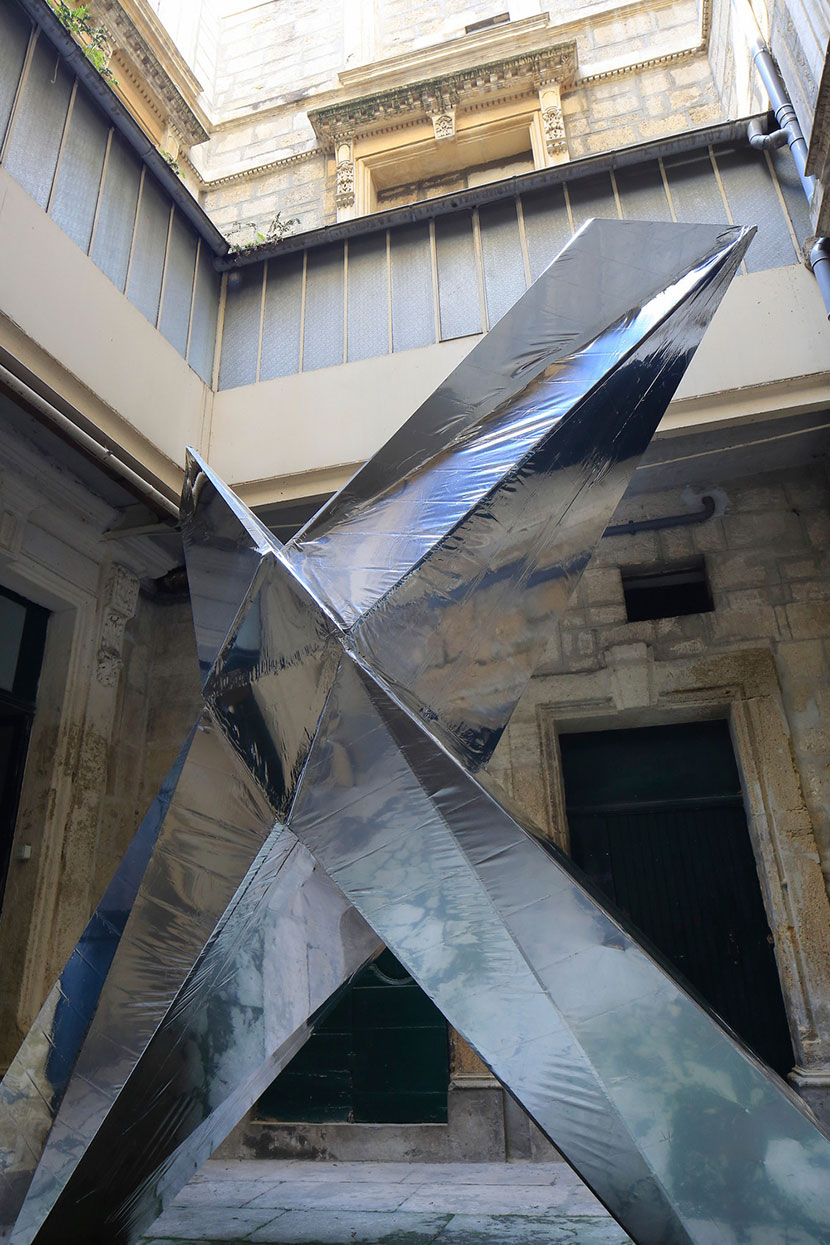 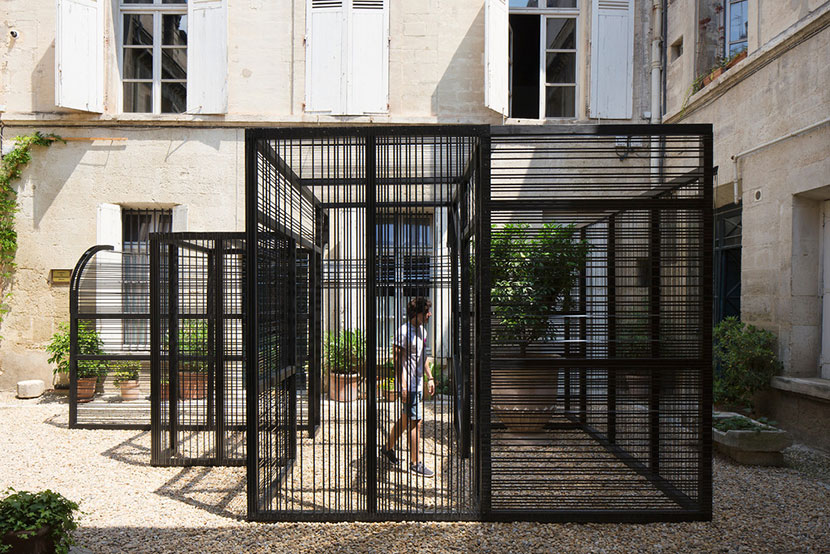 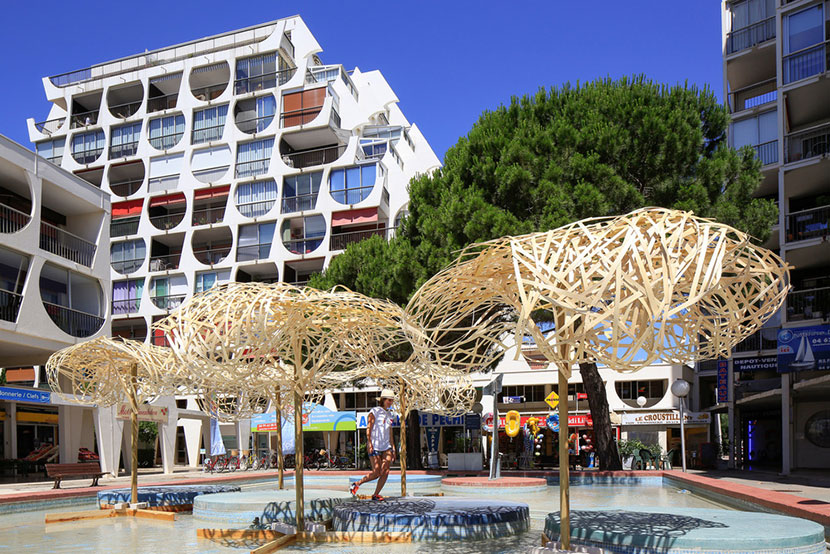 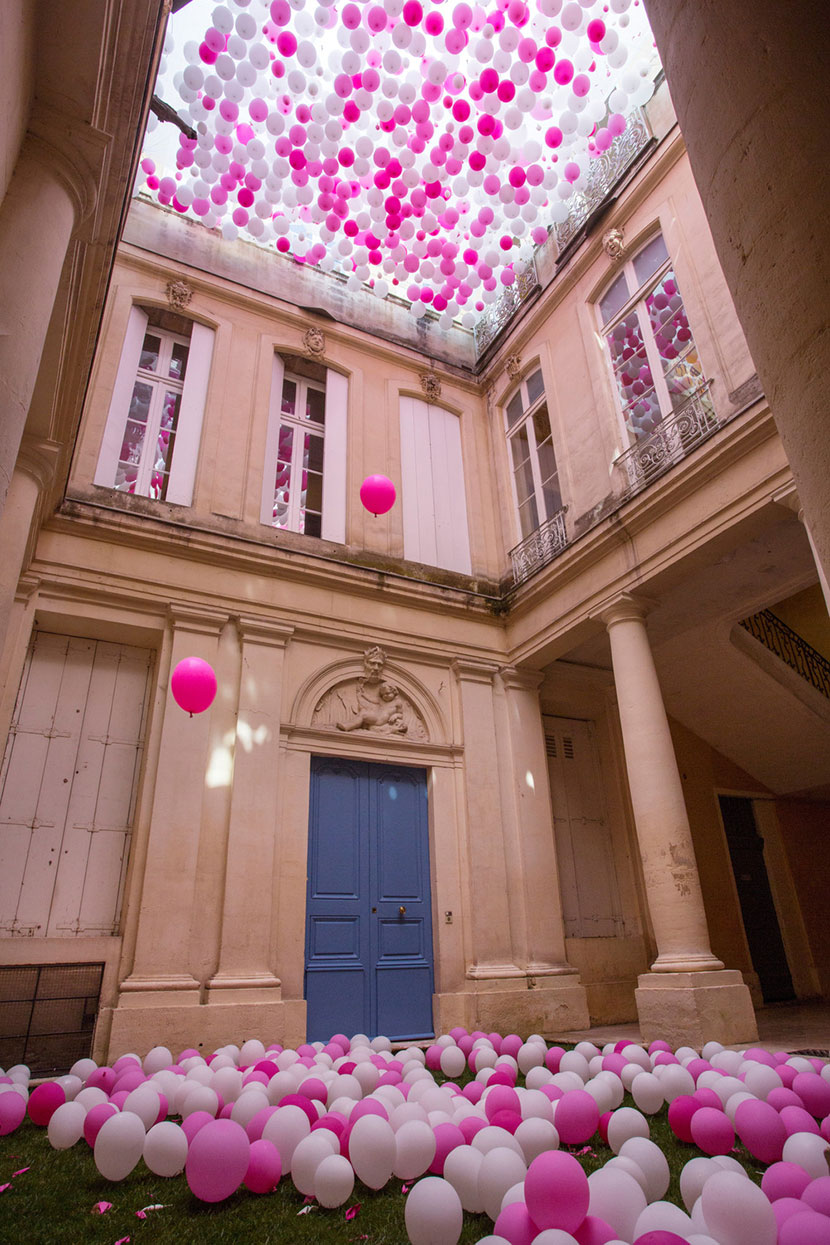 For the 10 years of the Festival des Architectures Vives and within a framework as exceptional as the court of the Hotel Saint-Côme, the standpoint of the Pavilion must be considered and contextual. It appeared important to use the various elements which put rhythm into the court as a base to the global development of the shape of the pavilion. Built on the ground, the Pavilion is spread in a multiplicity of random steps being able to be used as a reading or resting space for the visitors, or as a scene for the various events which proceed during the festival. The Pavilion then comes to include the columns which surround it to form a big space of reception for the public. From its form and generosity, this interiority appeals. Made up of a mural scenography, this space becomes a place of information and meeting around the festival. The unit is composed of medium’s plates tinted in the mass of anthracite color on the extern surface, thus privileging a mono material leaving the visual priority to the variations of the form and the global unit. The interior is composed of clear colors, contrasting with the external surface, to invite the public to enter. This space is beam, being stopping neither the glance nor the passage. The use of the pavilion wants to be fluid and ergonomic. 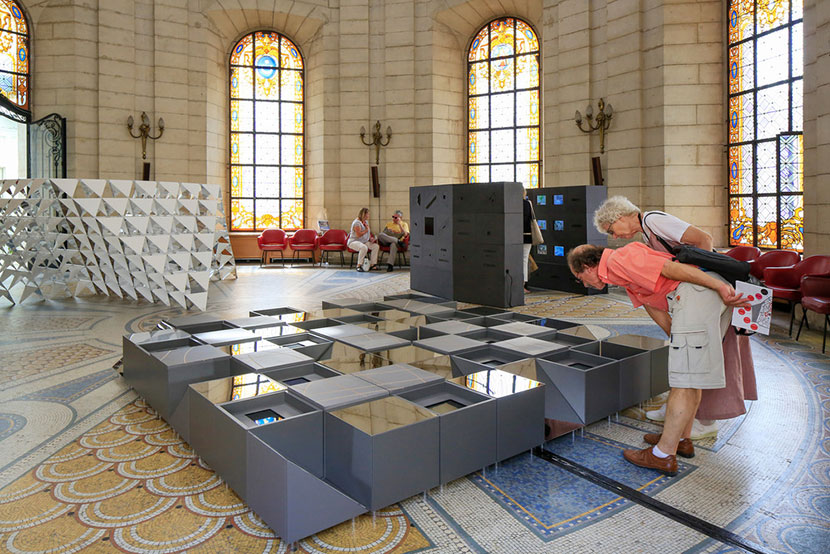